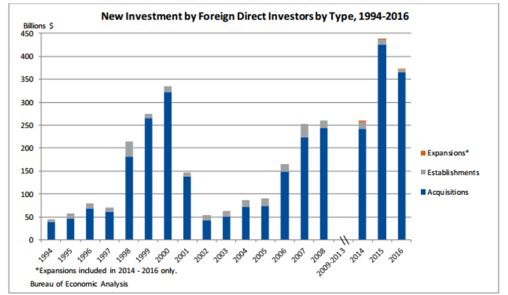 The Bureau of Economic Analysis today released statistics detailing the amount and type of new direct investments made in the United States by foreign investors in 2016, 2015 and 2014. The data released today includes information on investments broken out by industry, state and type of investment made – creating a new U.S. business or acquiring or expanding an existing one.

Business people, economists, researchers and policymakers can use the data to help them assess the impact of foreign direct investment on the U.S. economy and state economies. The data also help foreign entrepreneurs and others seeking to invest in the United States make informed business decisions. Additionally, the data inform national and state policymakers who shape programs to attract foreign direct investment.

Total greenfield investment expenditures—expenditures to either establish a new U.S. business or to expand an existing foreign-owned U.S. business—for investments initiated in 2016 which include both first-year expenditures and planned spending in other years, totaled $22.0 billion.

Employment at newly acquired, established, or expanded foreign-owned businesses in the United States was 480,800 employees.

With this release, the Bureau of Economic Analysis (BEA) is introducing statistics on planned and actual expenditures for greenfield investments. The new statistics are available on BEA’s website.